Bethany Ehlmann, Professor of Planetary Science at Caltech, explains why Mars is the “linchpin” to understanding the prospect of life in the universe and how we can design future missions to accelerate that understanding.

Is there life elsewhere in the universe? Are planets with habitable environments rare?

“We can make progress toward answering these questions by understanding Earth-like planets like Mars and Venus in our solar system,” says Bethany Ehlmann, Professor of Planetary Science at Caltech and Associate Director of Caltech’s Keck Institute for Space Studies.

Thousands of exoplanets discovered around other stars, including potentially Earth-like planets, drive a growing fascination for exploration, and Ehlmann calls Mars a “linchpin” when it comes to understanding the sustainability of habitability and the evolution of Earth-like worlds.

“When we analyze the divergent habitability paths of Earth, Venus, and Mars, we can look outward to the array of terrestrial exoplanets, and begin to understand their potential to host and sustain life,” Ehlmann says.

Mars was once a watery world

“Mars is the only planet in our solar system that has retained the geological record from its first billion years of evolution until today,” says Ehlmann. “This is a period that is disproportionately important for the evolution of habitability on a planet because giant impacts and early volcanic activity form the crust and set the atmospheric composition.”

For over a century, geologists have scoured all corners of our planet to construct Earth’s history by studying layers of rocks and relationships between landforms. Each layer of sedimentary rock represents a specific interval of geologic or deep time, capturing in the rock record lava from volcanic eruptions or sediments from ancient lakes. Together, the texture, chemistry, and mineralogy at the scale of centimeters allow geologists to construct a record of the environments and landscapes of a past world.

The ability to land rovers on the surface of Mars has helped geologists like Ehlmann to start to understand the processes that built Mars and controlled its changing environments. While early missions like Mariner and Viking provided mainly morphologic data related to the shape of the Martian landscape, more recent orbital and in-situ explorations have enabled observation of the planet’s surface at increasingly high spatial and spectral resolutions.

In 1999, images acquired by the Mars Global Surveyor Mars Orbiter Camera showed gullies within the walls of impact craters and Martian valleys. These were carved in the form of dendritic patterns that are also found in the shape of water-eroded valleys on Earth.

Since then, subsequent missions have found several signs that indicate that Mars once had bodies of water on its surface, providing the conditions for life. 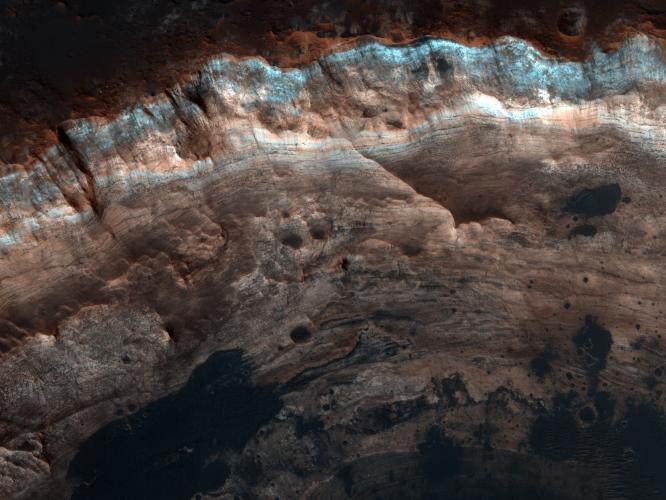 For example, the Opportunity Rover discovered areas where water-lain sediments were prevented from evaporating, indicating acidic waters in shallow lakes. The Spirit Rover found rocks rich in silica, which are typically formed in the presence of warm waters. An analysis of a large section of sedimentary rock near the Gale crater found sediment with features similar to the deposits formed by deltas, lakes, and streams on Earth. A variety of minerals formed in liquid waters have been detected from orbit in thousands of locations, indicating lakes, rivers, groundwater aquifers, and hydrothermal systems that formed diverse environments 3–4 billion years ago.

These findings, among others, tell us that Mars once had all the essential minerals, a more than adequate supply of water, and other ambient conditions necessary for sustaining life. However, the planet has radically transformed into the cold and dry world we know today.

How did this happen?

A 2021 paper published by Eva Scheller, Ehlmann, and other authors provides some answers. The elemental components of water in the atmosphere escaped from the planet into space. The team also suggest that thirty to ninety-nine percent of Mars’s initial water was incorporated into the hydrated minerals that form the planet’s crust.

There’s a key unanswered question, however, whose the answer could help us to understand the conditions that make life possible and sustain habitability on other exoplanets over a geologic period of time.

“We still don’t understand why Mars was habitable in the first place,” says Ehlmann. “We don’t know the combinations of gases and the evolution of the climate systems that made it possible for the planet to have water during its earliest years and whether there is still water underground today. We need to develop multiple future missions to conduct a systematic interrogation of multiple sites across a broader geographic swathe of the planet.”

Accessing the surface of Mars at scale

However, in order to conduct multiple missions to Mars, new, cost-efficient approaches are required. Current missions are cost-prohibitive to scale: In FY2020 dollars, the 2020 Mars Perseverance mission cost $2.7 billion, while the 2013 Curiosity mission cost $3.2 billion.

However, Ehlmann is energized by several developments over the last decade that have the potential to lower the cost of space exploration along multiple fronts.

These include the lowered launch costs that have come from recovering and reusing as much of the space vehicles as possible. Small satellites have increasing capabilities to travel to targets in the inner solar system and asteroid belt with sophisticated science instruments, including one led by Ehlmann to measure water on the Moon, called Lunar Trailblazer. In addition, increasingly autonomous spacecraft systems are allowing more resilient missions with reduced need for ground support.

“Across the board, we see a concerted push for technological innovations that are aimed at reducing the costs of space exploration on multiple fronts,” says Ehlmann. “The innovations that are resulting from a greater frequency of space travel make it an exciting time to be a planetary scientist.”

Ehlmann says that we are entering the golden era of space travel.

“Be it through developing small satellite missions, designing powerful telescopes, taking advantage of the large data volumes enabled by cloud computing or developing cost-effective missions, we are positioned like no other time in our history to go to Mars, and to explore the worlds beyond.”